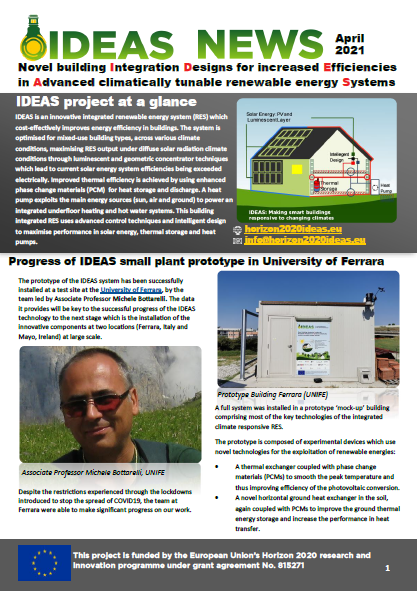 The prototype of the IDEAS system has been successfully installed at a test site at the University of Ferrara, by the team led by Associate Professor Michele Bottarelli. The data it provides will be key to the successful progress of the IDEAS technology to the next stage which is the installation of the innovative components at two locations (Ferrara, Italy and Mayo, Ireland) at large scale.

Despite the restrictions experienced through the lockdowns introduced to stop the spread of COVID19, the team at Ferrara were able to make significant progress on our work. 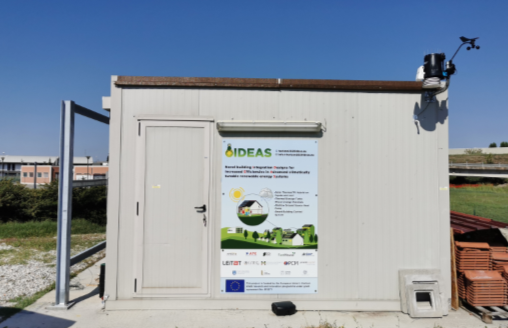 A full system was installed in a prototype ‘mock-up’ building comprising most of the key technologies of the integrated climate responsive RES.

The prototype is composed of experimental devices which use novel technologies for the exploitation of renewable energies: 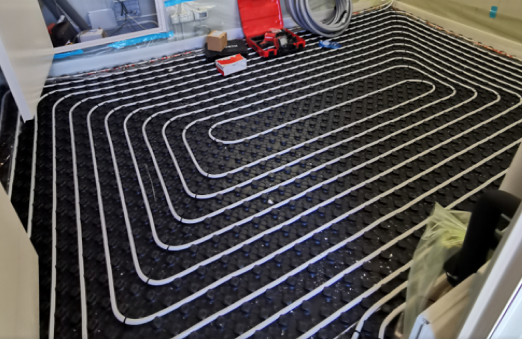 One of the most exciting parts of the system is the PCM integrated radiant floor (as can be seen in the image). The new radiant floor prototype using PCMs to increase efficiency provides space heating and cooling using water as working fluid.

The underfloor radiant system is capable of actively cooling or heating the building depending on the climate. As we know, there is a large difference between countries and regions with regards to the demand of cooling technologies in buildings, due to the different climatic conditions, which are expected to diverge even more in the future. It was important, therefore, that the IDEAS system would be suitable for all climates. The team at the University of Ferrara  led by Professor Michele Bottarelli achieved this by integrating the radiant floor into the design of the system so it can keep the building warm or cool the building down, depending on the desired effect.

Phase Change Materials (PCMs) are materials in thermal management applications. This is because they both store and release thermal energy during the process of melting & freezing (changing from one phase to another). When a PCM material freezes, it releases large amounts of energy in the form of latent heat. Conversely, when the PCM is melted, an equal amount of energy is absorbed from the immediate environment as it changes from solid to liquid.

This property of PCMs can be used in a number of ways, such as thermal energy storage whereby heat or coolness can be stored from one process or period in time, and used at a later date or different location.

PCMs provided by our partner PCM Products (website) were used by Professor Bottarelli and his team to increase the thermal properties of the radiant floor. In this case macro encapsulated hydrated salt units (PCM Products ThinICETM) were added to the base material surrounding the thermal loop (see below). The data demonstrating the improved thermal performance (in both heating and cooling scenarios) is being recorded and will inform the deployment of the system at the demonstration sites.

Each flat panel has a surface area of approximately 4.4m2. The GHXs were installed in a narrow trench 2.5 m deep and 40-60 cm wide, which in addition to being more space efficient, is also more cost-effective to excavate.

The trench was back-filled with sand, and a 20 cm thick layer of washed gravel was laid down. A micro-cracked corrugated drainage pipe was buried in the gravel  to “flood the trench” so as to increase heat exchange.

Here too, PCMs were used to increase the efficiency of the system: 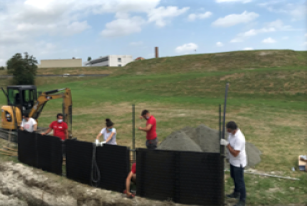 This prototype represents the first small-scale installation of the IDEAS system. The main goal is to operate an effective small-scale system in order to drive the performance large-scale installation and to anticipate preliminary rules and strategies for the next stage of the control systems being developed by Institute Mihailo Pupin, Serbia. The small-scale prototype fulfils the function of a test case for checking and eventually calibrating the IDEAS model, toward the reliable and affordable design of real cases. 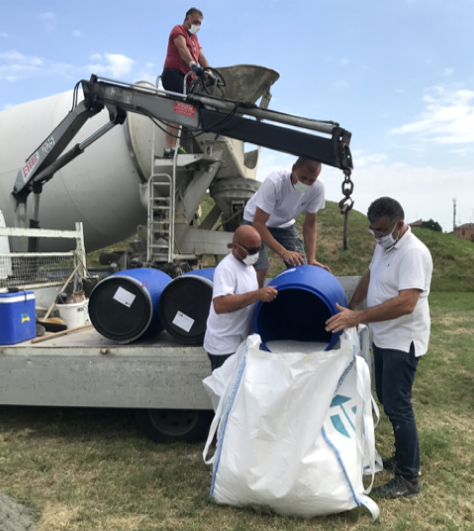 During the first installation, the prototype faced some significant issues (for example we had to reinstall the geothermal lines due to leakages; we adapted the PV/T-PCM with a commercial solution, we integrated a PCM storage tank which was initially not foreseen in the project; we had to rebuild the radiant floor due to insufficient homogeneity of the screed, etc.). However, the system has been operating since August 2020 and we have been recording data from it.

In the near future, when Covid19 travel restrictions are eased, we will move on to the third phase of the project to install the  IDEAS technologies on a café building at the University of Ferrara. This will represent the scaling-up of the system to demonstration scale. We will also be installing a demonstration scale system in a second location which will be provided by Mayo County Council, Ireland. We expect that we will be in a position to carry these installations out in the second half of 2021.

A full PDF of the report is available at THIS LINK 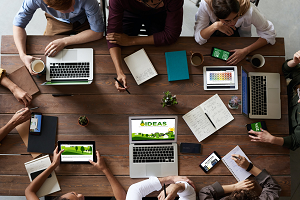 Between July and October 2019, several in-depth interviews were conducted with expert stakeholders representative of the energy and building management sectors in Italy and Ireland.

This was co-ordinated by Professor Elisabetta Strazzera of the University of Cagliari conducting a user-driven Participatory Technology Development analysis with focus groups to provide developers with feedbacks from potential users. Lúgh ó Braonáin and Dr Vincent Carragher of Energy Co-operatives Ireland  assisted in the research in Ireland.
The interviews were designed to gauge the stakeholders’ opinions on a number of issues related to the project, with the aim of obtaining information on the factors that could drive or hinder the adoption of an innovative energy system, like IDEAS. The interviewees were representatives of a number of important categories, such as builders, architects and engineers, house owners, real estate agencies, as well as the municipal administration.

In relation to the general housing context, the stakeholders discussed the factors that could push or slow down the housing market, effects of the regulation on new-builds and refurbishments, and promotion of energy efficiency. These  were seen both as potentially a hinderance or a driver, depending on the role that the Governments, at different levels, from European to local, decided to take.

The interviewees were enthusiastic about the range of innovative technologies incorporated in the IDEAS project.
Significantly, an aspect of the project which the interviewees were particularly impressed by was the smart controls system (SCS). Smart control systems were considered as a very significant opportunity and were seen as becoming very important to energy consumers and building managers in the future, thus SCS  of the kind being made available through ideas could be a driver for sustainability behaviour– change.

Finally, the stakeholders proposed suggestions to promote energy efficiency. The interviewees explained that it is very difficult to find tools that could encourage energy efficiency investments, however, if it this could be demonstrated through policy, education, and awareness, the benefits to the climate, as well as how the energy utility bills would be reduced, then that should encourage homeowners to invest in their properties.

Full report on this paper within the IDEAS project is available at our website publications section at THIS LINK.

We publish a newsletter every three months detailing the progress of our research and technology development and testing. We also publicise any events and seminars we hold. Our newsletter list is GDPR compliant.

FILL IN YOUR NAME AND EMAIL AND THEN CLICK STAY INFORMED

This website uses cookies to improve your experience while you navigate through the website. Out of these cookies, the cookies that are categorized as necessary are stored on your browser as they are essential for the working of basic functionalities of the website. We also use third-party cookies that help us analyze and understand how you use this website. These cookies will be stored in your browser only with your consent. You also have the option to opt-out of these cookies. But opting out of some of these cookies may have an effect on your browsing experience.
Necessary Always Enabled
Necessary cookies are absolutely essential for the website to function properly. This category only includes cookies that ensures basic functionalities and security features of the website. These cookies do not store any personal information.
Non-necessary
Any cookies that may not be particularly necessary for the website to function and is used specifically to collect user personal data via analytics, ads, other embedded contents are termed as non-necessary cookies. It is mandatory to procure user consent prior to running these cookies on your website.
SAVE & ACCEPT